This is an old one. But i thought i might as well start from the very beginning.

Couple of years ago i started a job in a craft store. They sell everything from fabrics to yarns and all the other crafts with all the accessories. Although i didn’t stay there for long, that is when i started sewing and resumed knitting.

I bought my very first knitting pattern there. It was a bolero jacket from King Cole in their Opium Yarn. When i first opened the pattern my jaw dropped. It was gibberish, secret code that made no sense whatsoever. Here i was thinking i knew how to knit.

That is when i realised how confusing knitting has been made, or has been for this whole time and i just didn’t know. 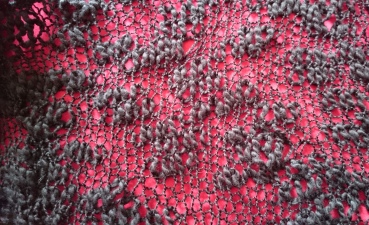 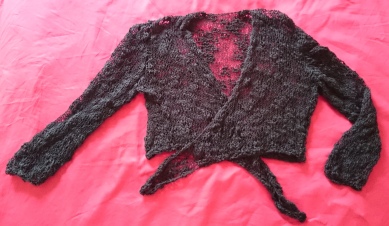 The only reason why i was able to finish it was Lizzie, my co-worker. She pretty much explained the whole pattern to me in normal human language that i could understand.

The yarn is very interesting, it varies in texture and thickness throughout. The needle size was suggested 6. At time i didn’t know it’s just a suggestion, i took it as gospel.

When i first started knitting, donkey’s years ago, i was a very tight knitter. You could barely get the needle through the loops, but somehow, over the years, i’ve gone the opposite way, i knit very loosely now. I didn’t know that at the time of knitting this bolero. Before this, i only knitted scarves and other small objects really, i knew my knitting wasn’t tight anymore, but it didn’t know what that would mean.

Obviously i skipped the swatching part as i had no clue to what that refers to. It’s a little example you knit beforehand using the yarn and tools to make sure your tension (the VVVV’s as i called them in my previous post)  matches the pattern.

I finished the bolero and it turned out to be more on the loose side, maybe 3 sizes too big?. Haha!

I followed the pattern and knitted the normal way. If i had done the gauge, i would’ve probably realised that i’m off by a mile and, if i knew more, i would’ve known that going down a needle size or two would fix my problem. 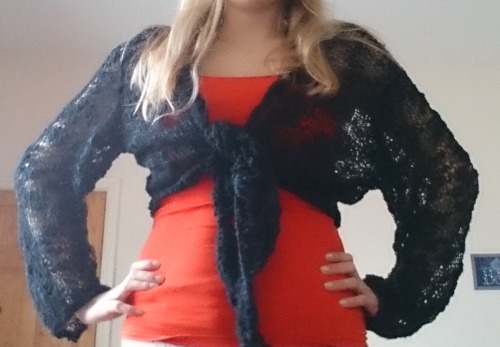 Still wearable, very loose, but wearable. (Spoiler alert – never wore it, gave it to my mum who also probably never touched it lol) If i didn’t tell you that the sleeves were supposed to be 3/4 long and the armpit bits actually near the armpits, you wouldn’t know it’s too big, would you?! 😀