After i finished my first jumper from WAK, i realised i can do this… quite well, so i was thirsty for the next challenge. And me being me, of course, it had to be something opposite of standard or normal. I knew i hadn’t earned enough to afford another WAK kit, so i decided to go to Abakhan and go through their folders of knitting patterns.

Found this Rico soft merino aran pattern for an unusual sweater. I liked the wide shoulder to shoulder collar and the bizarre sleeve style was also interesting. Before i bought the pattern for a few quid, i checked that the needle size required was the same as what i used for my WAK jumper as i decided to knit this new pattern also in cotton.

Did i know if such a substitute is possible? No. Did i do a swatch or any other prep work? No.

Well to begin with, i didn’t even have a clue what to do with the skein that arrived. I had only worked with balls of yarn previously, so when the sausage arrived i was a tad gobsmacked. Needles to say i made a humongous mess because i didn’t think that i should start by turning that sausage into a ball of some description, no, i just started knitting. 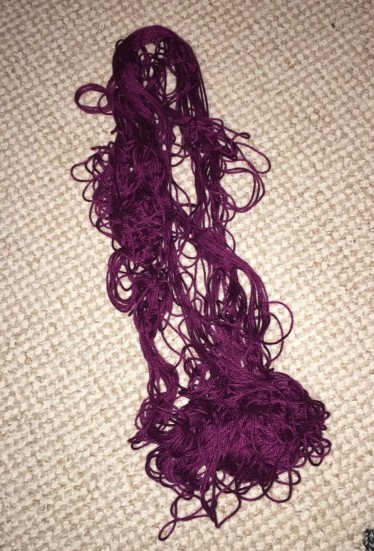 Then the next redonkulous thing i did was the ‘maths’ before casting on. I compared the stitches required for this pattern to the WAK one and when i realised it’s a lot more … (no, it didn’t cross my mind to check this stuff before buying shit) i decided to go rogue and cast on even less than WAK as that jumper turned out to be baggy enough… Imagine what would happen if i cast on even more…

Obviously i jazzed the pattern up a bit, just because. Fluffy sleeves where quite in at that time (yes, this is a proper flashback post) so i thought i needed a little bit of that in my life. I combined the cotton with a rico baby teddy aran yarn for the sleeves and the collar purely because i thought the fluff would hide the imperfections on the edge. 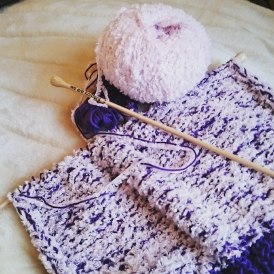 Over all i followed the pattern very briefly and half-assed which, in hindsight, probably wasn’t the most clever idea. It’s wearable and i have worn it a few times already and will continue to wear occasionally but it is not the most fitted garment if i may say so myself. My loose knitting unfortunately came into play and also the way that cotton behaves was not known to me. Thankfully the decision of casting on less stitches paid off, however it is still quite baggy, especially after wearing it for a while at the end of the day.

Unfortunately i only have unfinished (finished, not sewn up together) pictures so excuse my ends.

What can i say… The reason why i chose cotton instead of wool was the idea of a more of a summer/spring jumper, tunic even, and in all fairness i did achieve that goal. It is light and easy yet the fluffy sleeves add that little bit of cosiness. One thing i need to learn or it will hopefully will come with practice is to probably swatch and do better maths haha. And learn a thing or two about different yarns and how they behave, but that definitely will come with experience, right?!