I am someone who, although i don’t like to admit, is easily swayed to do random silly things. So i saw a WAK advert showing all those fancy knitting kits and i got them. One set was chunky but then i learnt there’s even a chunkier one. Obviously i needed that.

It wasn’t though a case of ‘shut up and take my money’… as i’m just not rich and that shit’s expensive. So i had some saving up to do.

Long story short, i bought a chunky sweater kit, the cheapest one that i could find. – Poupa Hoopoe Sweater. It looked cute.

The package arrived and the usual excitement with it. Gorgeous wool, massive wooden needles, could send a vampire or two to their eternal whatever place with those… Oh, and knitting with them felt more like rowing a boat. Exercise – yes please! 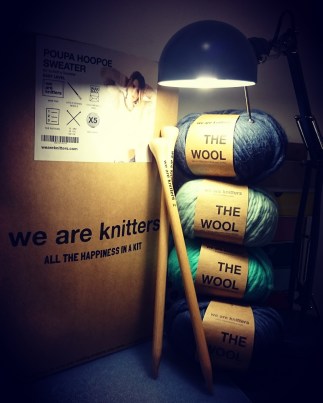 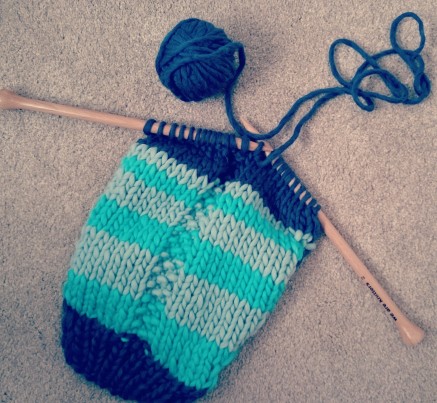 Anyhow, i finished the jumper and here comes the shitty part – i didn’t like it. That kind of chunky is just not for me. I looked like a lolly-pop – round up top and legs as a stick – you get the picture – awful. I took some photos, left it for a bit but then frogged it the following week. That’s when i decided to design my own cardigan using that chunky wool because i confirmed yet again that i’m more of cardigan wearer.

I thought i was really clever with this. Spoiler alert – i wasn’t. I did random maths, guesstimated pretty much the whole thing and deliberately made it harder for myself. Decided to design it with pockets, not that i had done that before with, you know, normal size yarn at least for practice… 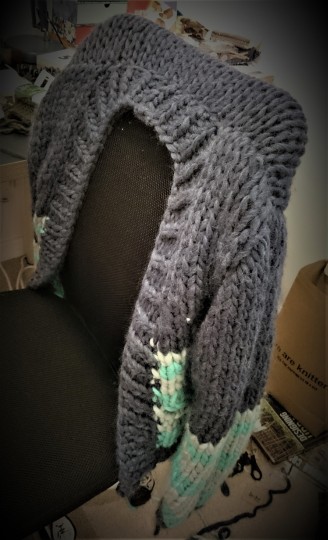 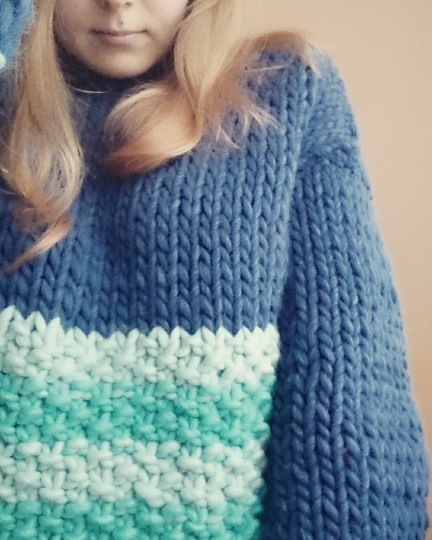 So that was a while ago, you’re probably wondering (or not really) what’s happening to that cardigan now. Well… it’s finished… to an extent. There are no pockets, just holes, not a single end is woven in, it fits me thereabouts, BUT, i am wearing it… Around the house. It is by far the warmest thing i own and i’ve worn it enough for it to be unfroggable as the fibres are already felted together in some places. My goal ultimately is to if not finish the pockets then at least do a duplicate stitch or something to cover the holes, ha, and maybe weave some ends. But that’s just maybe. Overall there are a lot of aspects about that cardigan that i really like. The bomber jacket style, the 1×1 rib all around the inside edge, moss stitch on the sleeves. This was from the ‘good idea, poor execution’ examples for sure.

Morale – bigger is not always better. And for crying out loud – set reasonable goals or at least allow for practice.