Casual ravelry scrolling one night lead me to a Latvian crochet designer. And she was having a sale. I don’t think i need to say much else…

On that night i convinced myself that i don’t need any new projects, that i can’t actually afford more patterns and i have enough WIPs on the go already. I slept on it… went to work, lived my day… and the following evening i was the proud owner of 5 of her patterns.

Everything was justified by a) the sale and b) the fact that i was frogging one of my works in progress and replacing with one of her’s. Oh, and c) these are crochet patterns, i haven’t actually bought any crochet patterns before so that’s a clean slate i got to play with.

Crochet eats a lot more and i mean A LOT MORE yarn than you’d expect. Even though i simplified the pattern by making only the front bit fancy and leaving back plain, i still run out of yarn. I started it at the beginning of September, i run out of yarn about the same time and so did the shop… it took weeks for WAK to get it back in stock.

Here we are, it’s mid October, i’ve finished my Overly Sweater and i’m chuffed to bits. 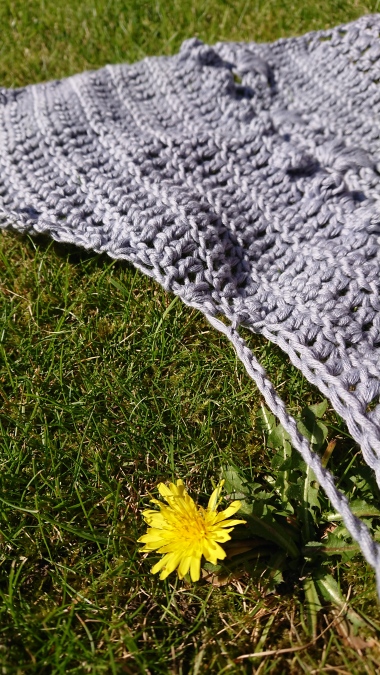 The pattern was tricky at first and i had to google tutorials for certain stitches. No, no, the pattern has perfect descriptions for everything, i just needed a video tutorial as i’m sometimes special. Anyways, once i learnt all the stitches it was easy peasy.

This is my first, well… first successful crochet garment. I used WAK pima cotton and i think it really worked for this pattern. I followed the pattern for the front piece, then when i realised i might be running low on yarn, i decided to make a plain back with just the bottom feature of puff stitches to save yarn. Also, i didn’t see much point having fancy pattern on the back just like the front. Plus it makes dressing up easier, you know, easy to spot which way round i must wear this… I also put my own twist onto the sleeves. I made them plain with the same puff stitch design used on the front & back around elbow area. Stitching up was a royal pain, oh, and weaving the ends… God, i hate that part… but it’s done and currently blocking as i’m writing this up.

It was refreshing to work on a crochet garment for a change. It was quick and satisfying. Learnt new things and expanded my wardrobe yet again… Win – win 8)