So following on form my previous introductory post, i thought i’d expand on all three of my weaves and tell you more about them. 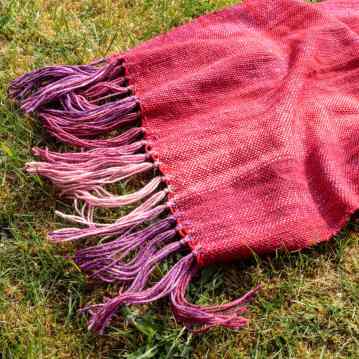 For my fist ever project i chose the red/pink yarn cake as it came to be a lot more pink than wine red as it seemed in the picture online. I knew this would have the most mistakes, so i went with the least favourite colour.

It was late that day already, when i decided to set it up, but if i decide something i have to go with it. For the set up i used my dining table, where i secured the loom, and the kitchen counter across the room, where i put the warping peg. I did do some flimsy maths in advance to make sure the 550 metres i had of that yarn would stretch across my room and fill the loom, but i was shooting blind, if i’m honest. If i had run out of yarn half way through the loom, i would have left it like that and worked with what i had.

A damn good attitude to have, as i was over half way in my warp when the bloody peg holding all that yarn slipped of the counter and everything fell to the floor. My heart fell to my toes as well. Because the counter has a curved profile edge and not a big enough overhang, there wasn’t enough space for me to secure that peg and for it to withstand the tension and the pulling.

So what did i do?! I didn’t start crying which is good, having low expectations helped, though i still expected to weave something out of this. I grabbed my metal drying rack, slanted it against the counter, put the chair against it to somehow secure in place and put the yarn loops onto the racks foot. Oh, it was a mess, no sign of even tension, but as long as it was on and i was able to continue, i was ok with that.

I finished warping my loom and now it was time for the next fun part – rolling it on neatly with a good and even(!) tension. At that size it is really a two man job, or at least you need to be skilled with years of experience behind your belt. Eventually i managed somehow and it seemed ok at first. Only after a while working on the weave i realised how badly my shit tension (and the fact that all threads fell off and got tangled) was messing with my work.

As previously mentioned, despite knowing i’d need at least the same amount of yarn for both warp and weft, i only had one 100g ball of yarn to use as the weft. Well, i still cracked on…

I still haven’t learnt how to tell how far in my weave i am, but at that point it felt like i might’ve been somewhere half-way when i run out of yarn. Obviously the first thing i did was jump back online to order some more just to find out it’s been discontinued… of course…

Trying to find a close match online is like chasing imaginary geese. Since it was not going to be seamless i decided not to waste more money and to go through my stash instead and find something at least remotely similar and appropriate. The closest match was same thickness very red superwash merino and that would have to do.

Because of my rocky warping and dodgy set up, the threads kept sticking together and time to time, when i changed the passage, the threads form the other side stuck together, which meant i didn’t have a perfect crisscross, but i had warp passing above two weft threads. Not the end of the world but it stands out. Edges were also all over the place. This is where the shit tension at warping came into play, but overall i was happy with with the end result. For finishing it off i simply used the basic knotted tassels. 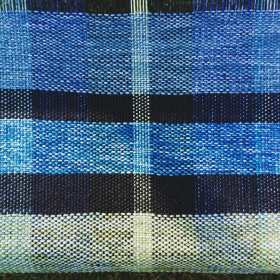 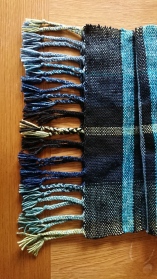 For the second project i had the same situation – a 200g blue yarn for the warp and a 100g of same thickness black yarn for the weft. It was time to learn from my first attempt.

I decided to scale down a bit. I wanted this next project to be more like a scarf, more narrow and maybe shorter too. By scaling down i thought i’d solve my yarn shortage as i’d be able to use the same blue yarn together with the black as the weft not just the warp.

This time i only used my dining table for the set up. It has that middle bit that let’s you make it longer, so when i measured it, i thought that’s enough for a scarf. I also tried a symmetry as the yarn cake looked like it had one. I grabbed a thread from the outside and the inside and wanted them to meet in the middle by adding some black warp fragments too. It turned out that yarn did not offer a symmetrical gradient, but the colours were close enough so i kept it as such.

During this project i learnt that, if you choose the same thickness yarn for the warp and the weft, they both become dominant and there might be clash happening. If i had only gone with the black weft, the scarf would’ve turned out so dark, that my symmetrical gradient would be close to invisible. But, as i decided to use my warp yarn as well, i split it in different colours segments and tried my luck at striping.

Chris helped me with the set up this time, he held the warp tightly as i was rolling it up onto the loom, making sure the tension is even and the threads are laying correctly. That was noticeable straight away, throughout the whole scarf i only have one or two rouge threads, which i am very happy about. Also, my edges were so much better this time, neater and even.

As for the finish i decided to go for braided tassels. What i did not anticipate was the length of the plats at either end. Because i made the end tassels while the scarf was still on the loom, i couldn’t check if i’d be able to achieve the same lengths. When i unrolled it, unfortunately, my loose threads where almost half the length on the other end. This is because i tried a different start compared to the first weave. Note to self – just make a mental note at the start or unroll the whole thing before addressing the ends.

Just like with the previous scarf i couldn’t know where i was in the scarf – half way?!, a quarter in?! Even though my stripes were somewhat random, i wanted to keep the symmetry at the either end. It was tricky, but i’m satisfied with the result. Though i wonder if there’s a way of ever knowing how far you’ve woven and how much you’ve left? Hmm… 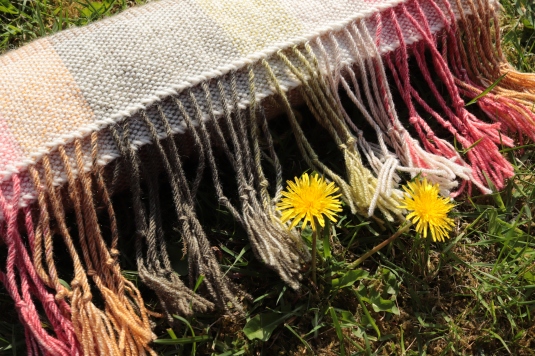 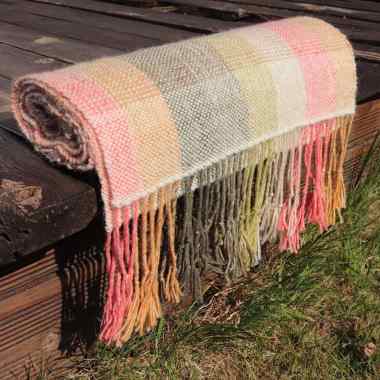 The third was the most ambitious project. I wanted it to be long and wide, similarly to the first one. The situation with the yarn was the same, of course, but luckily my humble stash came to the rescue. I found the same weight brown alpaca yarn i purchased on my trip to Wales last year and a white sport wight yarn i got with the membership from John Arbon. I was quite curious how the fabric will look when using a thinner yarn as the weft. Just as i suspected – the warp colour came through a lot more when used the thinner weft.

For this scarf i also decided to try and weave with two colours in the same time to achieve the little stripes. Oh, it took me a while to get my head around it. A while while. The trick for achieving the neat edges is for the two yarns to wrap around each other in order for it to be correct and look good. At first, it was so slow because what works for one side doesn’t work for the other. But eventually, when i finally understood the magic, i was rushing through like a pro.

I also decided to make this scarf in block colours – solid white, white and beige, solid beige and white and beige again. I tried to keep the blocks the same width but boy did i get it wrong. I wasn’t using a ruler, i thought a rough eye measurement will be ok, but turns out i kept compensating and adding a row or two, so in the end there’s a subtle block width increase.

So, after trying all these new things, i also wanted to finish the weave in a different way. I already had practised loose knotted tassels, braided tassels and frankly i was stomped, i wasn’t sure what else is there to do. But so it happened that i came across a fantastic tutorial on spun-like tassels, like the ones all the shop bought scarves have. I thought that kind of magic can only be done commercially using special machinery, but it turns out it’s simpler than simple. Amazing!

Here’s the video for that, but i also learnt to hem the edges. I learnt it when i was already finished so i hemmed the end and then the start, although you’d hem the start as you start the weave, but that’s a note for next time. But oh my goodness what a difference that makes, it looks so professional, at least to me. So i’m most happiest with my third creation. The edges also look damn good, far from perfect, but gosh, i’m good. Smug face.

So, that’s that, my month of weaving. Definitely learnt a lot. No doubt i’ll be making more. I actually have to stop myself for warping on as soon as i’ve finished, because it takes over my life as there’s nothing else i want to do. Which is not that bad if you think about it, but i think three was a good amount of practice, now i need to have a clear idea or purpose for these weaves.

Ultimately i’d like to weave something and then create a garment out of it, sew my own woven fabric. Also i want to try different densities, but that requires more different reeds, which i probably won’t be buying anytime soon, at least not this year.

Also, i’d like to reverse my proces and have the warp plain and weft as the dominant yarn. I already have yarn purchased for three more projects, but like i said, i still need to think them through and have a clear purpose for them… even if it’s still another scarf ^^

2 thoughts on “The three sisters.”